PWF History: Now and Then 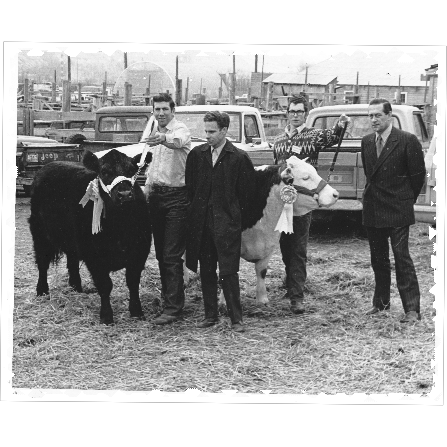 THEN The year was 1939 and WWII had just begun when word was received that the Army had taken the Pacific National Exhibition grounds in Vancouver over to serve as a base, thus forcing the cancellation of the British Columbia Winter Fair that had been held there annually for some years. This was a major concern to those who were preparing their cattle, sheep and swine for the show.

While stockmen were left wondering what to do, a group of people saw this as an opportunity to establish Kamloops as the livestock center of the province and steps were immediately taken to create a new show and sale in Kamloops. With the help of the BC Beef Cattle Growers Associa-tion (the forerunner of the BC Cattlemen's Association), the BC Sheep Breeders, the Interior Swine Producers, the Dept. of Agriculture, the Chamber of Commerce and the City of Kamloops, the idea started to take shape. Matt Hassen, well known Auctioneer, started out in search of the $1200 needed for prize money. He went to the Vancouver Exhibition Association and asked for $100 of the Federal money that had been allotted to the now cancelled BC Winter Fair and was, of course, refused. (This refusal likely had a long lasting helpful effect on the Kamloops endeavor because when the Vancouver Exhibition Association wrote the next year to the Interior asking to have the participants return, most remained loyal to the newly formed venture). Hassen ap-proached the Provincial Government and received $500. Business people in Vancouver and Kam-loops were canvassed but the $1200 goal was not reached.
The BC Beef Cattle Growers had previously planned renovations to the Bull Sale arena with grant money from the Federal Government and with this money the sales ring was improved, seating enlarged and a furnace installed, as this was taking place in December and the weather could be very cold.
The first “Annual Provincial Christmas Fat Stock Show and Sale” came into being on December 4, 1939 located at the Kamloops Stockyards. The Boys and Girls section, (which evolved by the late seventies into one of the major 4-H competitions in Canada), started with only a modest number of calves in that section. In fact there were fourteen calves in the Boys and Girls Section and Elmore McMorran of Harper Ranch was the winner. The Open cattle competition dominated the show and sale with 314 being sold of which 290 had been entered in the carload of 15 or group of 5 classes, while 24 were entered in the individual halter classes. The Swine show had an exhibi-tion of 100 brood sows and 5 Yorkshire Boars with 176 market hogs being sold. An undisclosed number of sheep were sold with final figures indicating a total of 797 head of cattle, sheep and swine being marketed for a grand total of $37,732.

The Calf Scramble (later the Fred Nichol Event) had its origin in 1959 with the first one being held in an old airplane hangar across from the BC Beef Cattle Growers Yards. Those who caught a calf kept it for their project the following year with the calves being donated by area ranchers. The event has evolved from chasing livestock around an arena into a practical obstacle course of ranching activities.

The Christmas Fat Stock Show & Sale changed its name in 1961, when it became the Provincial Winter Fair. The fair then moved locations in 1970 to the previous KXA Agriplex on Mount Paul Center.

NOW Today, the fair occurs on a smaller scale, but with the same heart, enthusiastic and dedicated volunteers of the past. The fair is still a tradition for multi-generational families, however there are numerous newcomers. The livestock show is still the heart of the fair, but in the past we have expanded to include various other groups including craft and food vendors, as well the first annual Top Hand Ranch Competition in 2008.

In 2016, we moved to the gorgeous grounds at Circle Creek Ranch in Kamloops. We are proud to offer highly entertaining family events and activities, in addition to showcasing local talent on the Main Stage.

In 2018, in honour of our 80th Anniversary—we were pleased to showcase our region’s local fare with a delectable wine pairing event—Grapes & Grill on the Saturday of the show. The local beef & sheep was donated by Jason & Vickie Brandon and Riverbend Orchards. The menu was paired with our local winery, Harper’s Trail, fantastic wine selection. And then on Sunday, we honoured our ranching and Winter Fair Pioneers with the Pioneer’s Tea.

We hope everyone can come out and experience history taking place by either exhibiting in the fair or just coming down to the fairgrounds!

We appreciate the great support we get from our fair sponsors, livestock buyers and 4-H clubs throughout the Cariboo and the Thompson-Okanagan Valleys!!